This is probably the fourth or fifth homemade mac and cheese recipe I've made but the first crock pot mac and cheese. The others have been stove top with a finishing touch in the oven. Though Lauren and I were fans, especially once you added a touch of Sriracha, the rest of the family had no problem telling me they wished I'd opened a box of Kraft.

How can anyone prefer powdered "cheese" to tons of shredded sharp cheddar and Colby Jack? 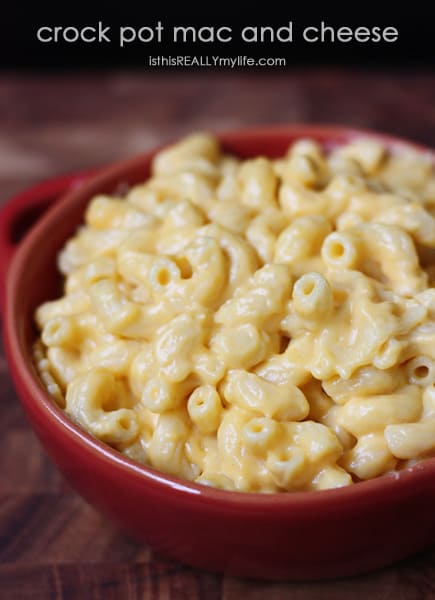 I adapted this recipe from Taste of Home's Easy Slow Cooker Mac & Cheese by using sharp cheddar and switching out the provolone and fontina for Colby Jack. And then I doubled it, which I don't recommend unless you're feeding a dozen people who DON'T prefer Kraft.

Did you know you can get Kraft Macaroni & Cheese for a pretty good deal through Amazon Prime Pantry? Love me some Amazon Prime!

I would totally make this again and take it to a family potluck as a side dish. I don't know what everyone else's problem was, but Lauren and I thought this crock pot mac and cheese rather tasty. Of course, it wasn't as divine is this gourmet macaroni and cheese I posted over two years ago (you can tell by the not-so-awesome food photos). Speaking of which, I think I need to make another batch of that...

Printable recipe for crock pot mac and cheese below. Enjoy!