Disclosure: I received the ZAGGfolio in exchange for this review. All opinions, thoughts, videos and their accompanying subtitles are mine. I totally claim ownership of it all (except for the official ZAGG video, of course).

Believe you me, this is about as far from a geeky technologically savvy review of the ZAGGfolio for iPad 2 as you can get. Not only did the video file of the final—and best—take go all corrupt and shut down my computer, I had to record the review in my bedroom for two reasons:

Trust me, you don’t want to mess with the light switch when it’s controlling something in his half of the office. Been there; done that; barely survived.

It’s all quite sad because this beautiful red beauty… 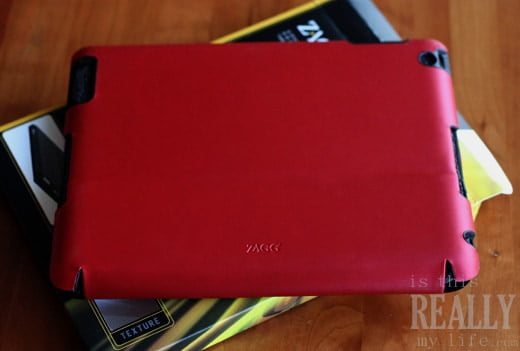 …and its accompanying wireless keyboard… 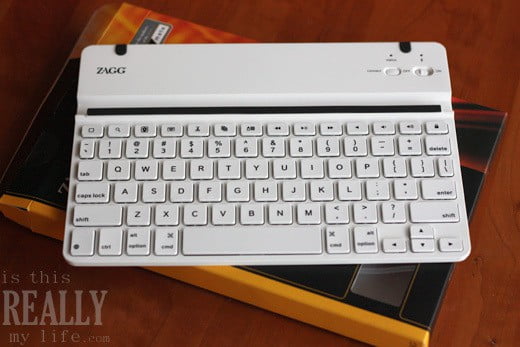 …should get a shout-out equal to their awesomeoness.

If I had it my way, my video review would look something like this (except those would be my hands and the fingernails would be painted in OPI’s “Yodel Me on My Cell”):

Instead of a marketing team and a professional studio, I had a 14-year-old videographer, a badly lit bedroom (but not so badly lit as the office in which I’m currently straining to see the keyboard) and not nearly enough caffeine and chocolate.

You’ll also notice I could’ve used a bit more practice sliding the ZAGG wireless Bluetooth keyboard into the ZAGGfolio case. I find it easier to leave it in the case—just slip in the iPad 2 and go—so I rarely remove it…except for the occasional video review. Madison got it right on the first try; obviously I have issues. It truly IS simple to slide it in and out of the case no matter how I make it look on the video.

Speaking of my ZAGGfolio for iPad 2 review video, here it is in all its non-scripted glory. Hopefully you can see past me and catch how cool this case really is. Because it’s really, really, REALLY cool.

Yeah, good luck with that.

Yep, I said “criminey.” I was channeling my grandfather. Sadly he knows even less than I do about sliding a wireless keyboard into the case.

And I just realized the link at the end of the review is wrong. Let’s hope those watching the video review over on YouTube are smart enough to search my site once that “404: Page Not Found” error pops up. *sigh*

You can check out the ZAGGfolio for iPad 2 keyboard case and all its colorful options on ZAGG.com. You’ll also find all those super techy specs I failed to mention in my review.

At $99, which includes the wireless Bluetooth iPad 2 keyboard, it’s a steal.Just don’t steal mine. After the night I’ve had, I will hunt you down and make you watch Mulan with my kids.

P.S. I’ve checked out “real” reviews on the ZAGGfolio and it’s received some seriously high marks including quite a few “Best of” product awards.

P.P.P.S. I couldn’t resist including this super short gag reel. Enjoy. (I promise I won’t be doing any more video tech reviews any time soon.)