My oldest daughter recently celebrated her 12th birthday. For birthdays 1 through 8 I am all about making super cool theme cakes. I’ve done everything from a princess castle to Blue from Blue’s Clues to a spider complete with pudding guts. After they turn 8 their cakes mellow out and are simply their favorite cake flavor topped with their favorite frosting. Once in a while I throw on a few sparklies or embellishments, but they’re not nearly as time consuming as those earlier cakes. 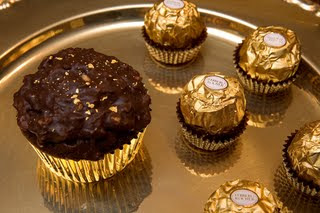 Because my daughter’s favorite candy is Ferrero Rocher, I searched the internet for a recipe similar to the candy and found this Ferrero Rocher cupcake recipe on Cupcake Project. (Image at right from the original recipe on Cupcake Project.) It was going to be a super nifty surprise and I couldn’t wait to get started! The first thing I had to do was locate hazelnut extract and hazelnuts (aka filbert nuts), which I found at Pirate O’s, a local version of my out-of-state favorite, Trader Joe’s.

The morning of her birthday I decided to bake some chocolate zucchini bread, which I ended up burning by forgetting to adjust the time for mini loaves. That should’ve been a sign of what was to come. Here it is in a “hazelnut” shell: 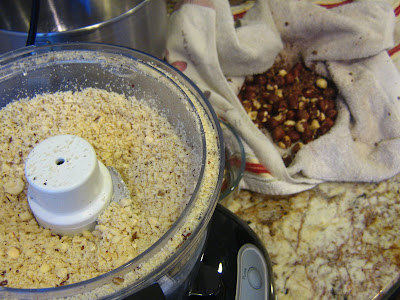 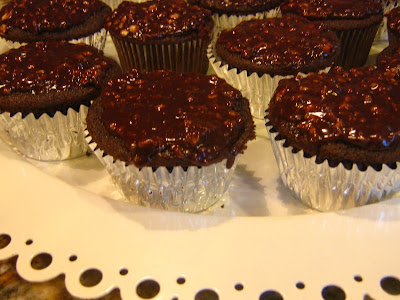 By the time I was done mixing, baking, roasting, rubbing, processing, filling and frosting the cupcakes it had taken just as much time, if not more, than it took me to build a pretty impressive train complete with candy-filled cars.

I had a taste of one of the Ferrero Rocher cupcakes and I wasn’t that impressed, especially with all the work that went into it. Perhaps if they’d risen better or my filling had thickened or the ganache had been Food Network Challenge-worthy they’d have been a bigger hit. I’ll never know because that recipe has long since been recycled.

So what do you do when the birthday girl isn’t a big fan of her birthday cake–or cupcakes in this case? You have a do-over the next night and go with the ever-popular grasshopper pie:

Take the lid off the pie crust, peel off the label and wash. Soften the ice cream in the microwave at a super low temperature at about 30-second intervals, stirring often until it’s about the consistency of, well, that ice cream soup kids like to make. Spread evenly in the pie crust and place the lid upside down to cover. Crimp the foil edges around the lid to secure it. Place on an even surface in the freezer and freeze until set (at least a couple hours).

To serve, remove the pie from the freezer and let stand at room temperature for a few minutes until soft enough to cut with a sharp knife. Cut pie into slices and top with chocolate sauce, whip cream, cherry and nuts. Serve immediately. 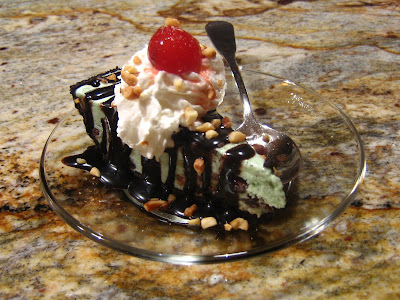 Obviously you can make any version of this ice cream pie you’d like. You could fill it with cookie dough ice cream or take a graham cracker crust and fill it with sherbet. Go crazy! –Emily

“I doubt whether the world holds for any one a more soul-stirring surprise than the first adventure with ice cream.” ~Heywood C. Broun