When my friend Kim announced she was throwing herself a 31st birthday bash, I was all over bringing something sweet to the party. I noted the pink color scheme and thought a vanilla bean cupcake with some sort of pink decoration would suit the event perfectly. 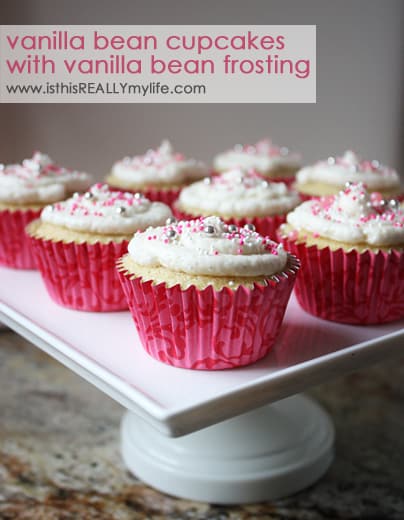 But wait…I need to use a real vanilla bean in the cupcake AND the frosting?!?

Though I had yet to scrape my first vanilla bean, I was determined to make these vanilla bean cupcakes no matter the extent of my discomfort. Come to find out, it’s amazingly easy to scrape seeds from a vanilla bean…so easy I wondered why I’d been a vanilla virgin for so long.

Ready for your “first”? Check out yesterday’s post in which I share all my not-so-secret secrets: “How to scrape the seeds from a vanilla bean.” (Clever title, right?)

…
Now back to the cupcakes…

Aren’t they so pretty? I know what you’re thinking. “Where the heck is all the frosting?”

Here are your choices:

A) Kim prefers no more than 1mm of frosting on her cupcakes.

B) I doubled the batch and still didn’t have enough to frost them all.

C) All of the above.

The answer is C. Of course, I found out about A later that night—what a happy coincidence!

…
Here are a few notes about this recipe:

…
If you try for a denser cupcake and it works, let me know what changes you made. Of course, if you prefer light and airy, this cupcake is so totally for you.

All I know is I’ve never seen such beautiful flecks of vanilla bean in all my life.

Because the original vanilla cupcake recipe isn’t printable, I’ve created a printable version for you below. (You can find the original here.)
…

Print
Prep time
15 mins
Cook time
14 mins
Total time
29 mins
These vanilla cupcakes are light and airy and have the perfect vanilla flavor. Real vanilla bean in the cupcake and frosting make them as beautiful on the eyes as they are on the tongue.
Author: Emily ~ isthisREALLYmylife.com
Recipe type: Dessert
Serves: 16
Ingredients
Cupcake:
Frosting
Instructions
Cupcakes
Frosting
Notes
Original recipe from the Cupcake Project: http://www.cupcakeproject.com/2011/09/ultimate-vanilla-cupcake-test-baked-by.html
3.1.09
…