Am I the only one who loves receiving Christmas cards from family and friends but secretly groans when they’re accompanied by a short novel? I’m not talking about a short and sweet top ten list (this year we cut it down to a top seven) or handful of sentences with holiday wishes. Those make for a quick, easy read.

I’m referring to the double-sided, 8-pt, single-spaced sheet of 8 1/2 x 11 paper that causes me to do two things: one, feel guilty for not having better documented my children’s lives; and two, seriously question the sanity of someone who would rather spend hours typing a newsletter than stuffing her face with holiday goodies while watching Food Network.

There is one exception to this rule—one family newsletter I read from start to finish and then read it again to Nathan. 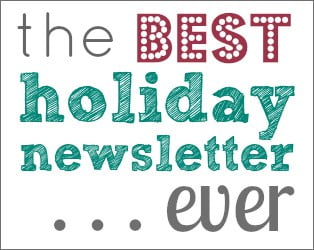 Read it in its entirety. You’ll laugh out loud and spew whatever you’re drinking all over your computer screen.

Don’t say I didn’t warn you.

This year for neighbor gifts I came up with the amazing idea of passing out Olive Garden Italian salad dressing with tags reading ‘Buon Natale.’ I managed this all by myself without Pinterest and I considered my epiphany both clever and frankly, spectacular, and so did everyone else I ran it past in an effort to peer pressure Kevin into agreeing. He was annoyingly less than enthusiastic and invented the adjective ‘nonchristmassy.’ Why could he not climb on board and just go buy a case of dressing? A better question is why does Kevin bother to disagree with me at all? Still, occasionally, I try to do things to appease Kevin since he rarely brings up the amount of money I spend at Hobby Lobby, so I started looking for option B.

Many of you may know that I’m not even a fan of neighbor gifts and find them only slightly less stressful than say…the Christmas card. So much so that years ago I even helped organize a neighbor gifts for charity thing to abolish them. This has not stuck, and since this year I voted Republican for the first time, I’m apparently no longer into ‘handouts’ and am back to figuring out a $3 gift that says ‘I am a spectacular homemaker filled with holiday joy and I’m sorry I’m a mediocre neighbor and hope this fudge with a red bow makes up for it.’ I’m not sure why celebrating Jesus’ birth should guilt me into wishing I’d learned how to make freaking divinity but there you have it. And please don’t email me and tell me you have a homemade caramels recipe that is really super easy because I already know you are lying.

So I decided to make cookies. (If you don’t know me well enough to know that I don’t bake them I’m not sure why you received this card.) And by make, I mean opened up the freezer and took out one of the 2 dozen containers of cookie dough I have bought from every kid in my zip code who needs to go to band camp or get a new uniform for I don’t care what. In a brilliant moment of clarity, I imagined that this would enable me to fake cookies while simultaneously creating freezer space for something more than dough tubs and a couple Otter Pops.

You would think it was all downhill from there but you would be WRONG because then I realized I had to clean my oven because Kev keeps cooking bacon in it. Yes, you’ve read that correctly; I don’t bake OR make breakfast. Anyway, Kevin thinks that baking bacon is the single greatest invention of this century (400 degrees for 25 minutes…Love, Kevin). I think bacon is the best invention of any century so the inside of my oven is a splattered bacon box which gives everything a slight indiscernible pork flavor that would normally be considered a plus except with your basic snickerdoodle or chocolate chip. The only logical solution at this point (in my caffeine- & aspartame-altered brain) was start over with oatmeal raisin cookies, which go better with bacon since oatmeal is also a breakfast food.

So…once my oven was semi de-baconized and all my fundraiser dough was in the trash, I was actually baking and thinking that I wanted to emphasize the following points: First, this is all Kevin’s fault. Second, SO many things I do seem like a good idea when in reality, not so much. Third, while you are silently judging me, this whole thing started from my supporting charity (teenage extracurricular addicts with a required cookie quota), which is technically in line with the whole season of giving thing and obviously embodies the spirit of Christmas. Lastly, the guy who invented fundraiser cookie dough probably has more money than the inventor of Spanx, which ironically is 100% caused by cookies and bacon so we need to find something else to sell and end this vicious cycle. Incidentally, I’m buying all future cookies from the Girl Scouts who have the decency to bake theirs first.

I wanted to write all of these points on the gift tag of the box of sketchy cookies but there wasn’t enough room and I’m working on my ability to filter so I decided to keep this entire debacle to myself until I forced myself to write the Christmas letter today. Frankly, I REALLY did not want to talk about being an empty nester or still not being at my ideal delusional weight or that all the men in our family started a Fantasy Football league (I DO NOT care how many points your RB has) or being mother of the future groom, which according to unreliable sources means I’m not technically in charge of the wedding and guess what? We’re still not on Facebook, blah, blah, blah. So apparently this is what I decided to share with the group instead, and now here we are out of room.

So here’s all you need to know:

Ryan and Leah are great.
Nick & Jess had a girl.
Alex and Amanda are engaged!
Steph is in college.
The dog finally died.
Kevin turned 50.
My grandkids are cuter than yours.

That about covers it.

Happy Holidays and much love,
The Darrows

The Molly behind this masterpiece is the same Molly who came up with the ingenious idea of outfit storyboards for family photos.

I told you she was super awesome.