A quick note: I can’t yet feature more than one printable recipe per post, so I’ve broken up last week’s tasty Taco Tuesday into three parts. Today is the final post: sweet cilantro rice…and just in time for your own Taco Tuesday tonight!

Part 1: Fish tacos with spicy chipotle mayo plus a link to my recipe for Cafe Rio-style creamy cilantro dressing

Part 2: Refried black beans (great alternative to out-of-the-can refried beans, especially if you love black beans like I do)

Now, this sweet cilantro rice isn’t everyone’s favorite. I am a big fan as is about half the family, but don’t let that fool you. The other half includes one picky eater and two little ones who’ve never been a fan of rice. If it’s a bit too sweet stick with about 1/4 cup sugar rather than 1/2 cup. I use about 1/3 cup because I’m all about compromise.
… 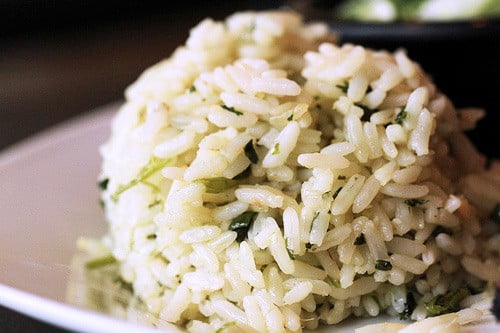 …
This cilantro rice recipe taste very similar to rice served at Bajio (and now Costa Vida). For more of a cilantro lime rice, toss with a little fresh lime juice before serving. Hope you enjoy it!