This post is about three weeks overdue but that’s about my speed right now–three weeks behind everything including laundry and sleep. I’ve been anxious to post about the super nifty shark and life preserver cupcakes I made for George’s birthday because they were not only easy (don’t confuse easy with quick) but really, really fun AND I received compliments from complete strangers when they saw them adorning the party table at Jungle Jim’s.

Like I said, don’t confuse easy with quick as these babies did take time but it was worth it. We did have some cupcake malfunctions; I will share those with you so you can learn from my mistakes. Maybe then your sharks won’t take a nosedive onto the cupcake tray.

First, make sure you only use Twinkies without any splits on the sides or tops. Notice in the photo below the one on the left has filling bustin’ out the side. Trust me, you want to eat this rather than use it. 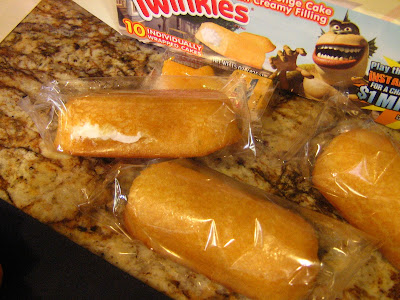 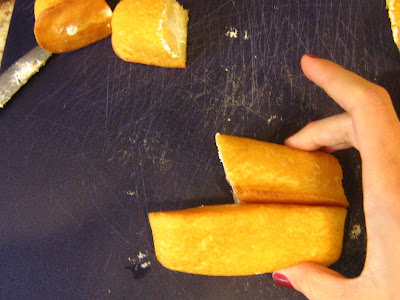 Possible cupcake malfunction: DO NOT make this angle too steep or the shark WILL fall over. If you want it at more of an angle then I suggest propping it up with a hidden gumdrop or something once you press it into the cupcake’s frosting. Either that or slather on a ton more frosting than I did so it has a good support system. And of course don’t let them sit too long before eating. Those sharks do get tired! 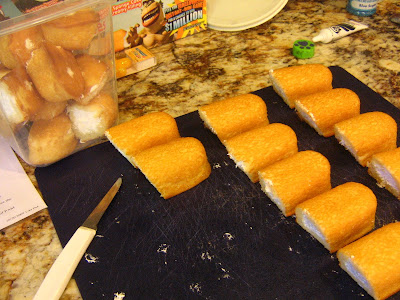 After all your sharks are lined up in a row you’ll want to trim a very small “V” shape where the shark’s jaws will go. 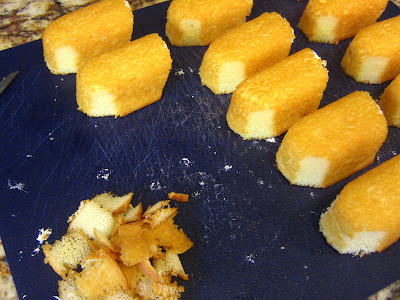 Now it’s time to make the fins. Twist, pull, pray…whatever you have to do to get the Oreos apart so you can scrape off the filling. I found Pampered Chef’s Quikut paring knife* (I own like five of these handy, super sharp little things–they’re only $1.75!) perfect for this job and for cutting the cookies in half, which you need to do so you have your fins. After you’ve eaten the broken cookies and had a swig of your ginormous Diet Coke (pictured at the top of photo below and a must for any cupcake adventure like this), cut a slit in your Twinkie and oh so gently slide that fin into place. 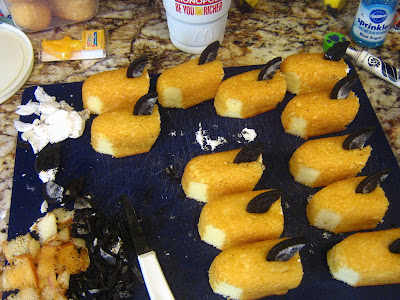 Possible cupcake malfunction #2: If you have a shorter shark body you’ll need much smaller fins so cut the cookies in half and then shave off a little more cookie. Otherwise you’ll either have to cut the slit so big it goes right off the Twinkie’s back edge and your Oreo won’t stay put (trust me on this one) OR simply make a bigger shark body so you can have whatever size fin you’d like.

If you’re going to use a pastry bag to pipe the teeth, set aside a spoonful or two of icing. If you’re going with my quick-and-dirty method of those pressurized frosting cans complete with tip, ignore the previous sentence.

Divide the icing and tint half of it whatever blue you’d like (can of frosting on left, below) for the ocean water and the other half gray. 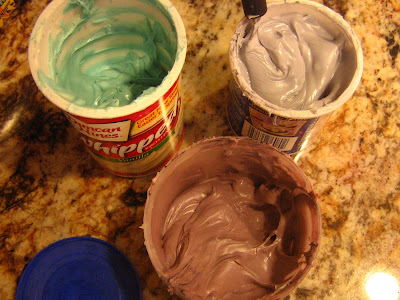 Possible cupcake malfunction #3: If you don’t have black food coloring (usually as a gel) leave immediately and buy some. Otherwise you will try making gray with a little neon purple mixed with whatever colors you have on hand just hoping you’ll get gray. You’ll then realize it’s still very purple (bowl of frosting in the middle, above) and bust open a very old bottle of black food coloring gel, scrape out what you can using a toothpick and then use that to achieve a nice, sharky gray (can of frosting on right, above). Sounds much easier to just buy the black gel, doesn’t it? Yeah, I quickly learned that too.

Ice the cupcakes using the blue frosting. Use whatever technique you’d like to make it appear frothy and wavy. I used the back side of my mini spreading knife and patted it up and down randomly on the top of the cupcake. 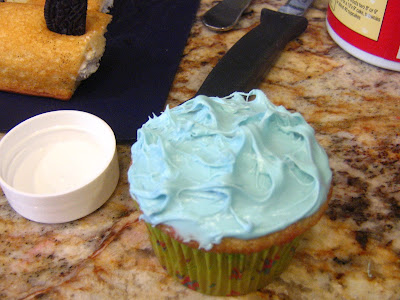 Then for an extra fun step we sprinkled the top with blue sugar. This was when George got to jump in and have a little fun. (I rarely let my kids get involved when I do their birthday cakes and cupcakes but I made an exception this time. Yes, he’s spoiled.) If you want to avoid sprinkles all over the counter and floor, try using a large bowl to catch them. You’ll be amazed how many sprinkles you end up recycling! 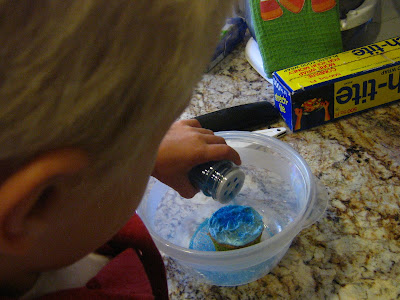 Now you get to nestle your Twinkies into the frosting and then freeze them for at least 20 minutes. (Refer to possible cupcake malfunction #1 for tips on shark placement and projection.) 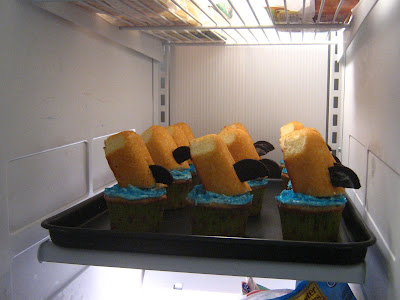 Now you can quickly work on the life preservers. Simply place on Gummy LifeSaver or peach ring off center on each cupcake then pipe three small lines with white frosting. Okay, so these were quick AND easy! 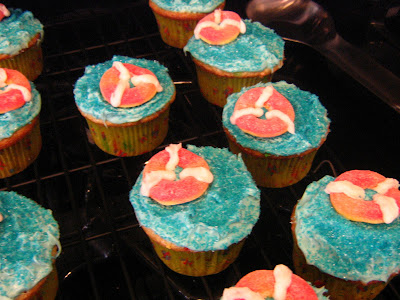 While your sharks are freezing their little fins off, trim your fruit leather in a sort of curved rectangle or oval about 1 1/2″ long and set aside. (Um, setting aside fruit leather is easier said than done. That stuff sticks like crazy so good luck!)

Now, the original recipe suggested warming the icing until smooth and then brushing it on with a silicone brush. I removed the cupcakes from the freezer, tried this and immediately decided this was so not going to work. So I simply took one of my other favorite Pampered Chef products, the Small Spreader, and used that to get the frosting well lathered over the shark’s body. I found it much easier, much less frustrating and requiring far less swigs on that Diet Coke. By the way, I have no photos at this point because my hands are covered in fruit leather and there was a snowball’s chance I was going to be able to take photos while frosting those sharks!

Before the frosting dries, apply your bloody red fruit leather mouth to the front of the shark and a little black gel for gills. Then press in the mini chocolate chips so the shark can see just what it’s biting. Note to self: make sure all sharks have two sets of gills. And for the grand finale, pipe white teeth around the fruit leather. Might I suggest investing in one of these fab cupcake carriers if you’re going to bake-and-take cupcakes more than once a year. I don’t have the top on it this time since those sharks were just too dang tall, but I love this thing! Mine is from The Cupcake Courier but I think you can find them elsewhere as well. 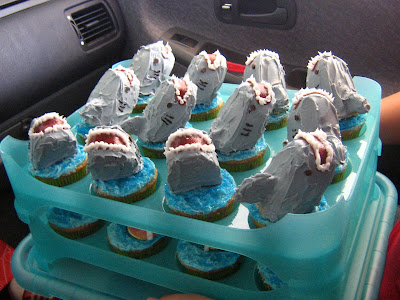 Whew! We made it to Jungle Jim’s Playland in time and only lost one shark on the way. Actually, it kind of made that shark look like it had battle wounds so I just told my kids it looked more lifelike that way. The best compliment should’ve been from George, who loved his cupcakes but it came from one of the helpers at Jungle Jim’s. She basically said those were the coolest cupcakes she had ever seen…and she’d seen a LOT of cupcakes! 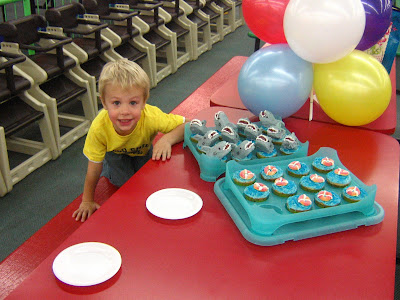 Disclosure: I don’t sell Pampered Chef and have hosted only one party—but it was a really fun party!

Note: I found the original recipe on The Celebration Shoppe and simply tweaked it a bit.