The winner of the Raw Melissa giveaway for one (1) dozen macaroons is Susie, who earned herself five extra entries with her correct answer to the question:

What were the two “mystery” veggies in Melissa’s fridge shown in the second video?

The correct answers were a turnip (rutabaga) and a parsnip. I had no clue what they were so I’d never have won those macaroons. Good thing Melissa shared some with me that day or I’d be eating the winner’s stash instead of sending them! 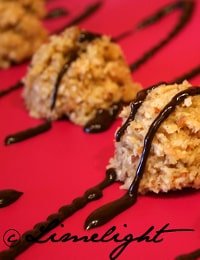 But because I want you ALL to taste (and get addicted to) Melissa Chappell’s fabulous macaroons, I am giving one free box to everyone who entered the giveaway! Shoot me an email at emily {at} isthisreallymylife {dot} com to claim your box (if you want one). Make sure you include your shipping info and your choice of plain or chocolate-covered macaroons (like there’s even a choice there…duh).

It may take me a bit to secure all those boxes and ship them, so be patient, but I will do it, PROMISE! By the way, I know who commented and who didn’t so don’t try to put one past me. I’m blonde but not THAT blonde.

Thank you all for taking the time to read through the post. Hope you learned something new! Next week I hope to post my recap of Raw Melissa’s healthy food prep class. You’ll die—and drool—over how beautiful her dishes were (salads, sides, desserts). And they were super tasty, especially the almond butter. I almost hid it under the table so I wouldn’t have to share it with the rest of the class. It was like candy!

Have a great weekend!

*UPDATE* Apparently when checking Wikipedia for “rutabaga” and seeing “turnip” interchangeably I assumed these two vegetables were the same. Well, I just heard from Melissa I was mistaken:

Just a side note. The first veggie was a turnip. A rutabaga and a turnip are two different veggies. The rutabaga is less like a radish whereas the turnip is more like a mild radish. A rutabaga is yellowish with the same sort of markings on the outside as a radish. They are both great fresh and cooked. I really like grating rutabaga into a salad or cubing it for a soup.

So there you go. Can you tell I need a lesson in veggies other than the ones most commonly found in the freezer section at Smith’s and Costco?

Previous Post: « A stirring of the soul
Next Post: Mad Libs Monday: “Talking” by Stephanie of The Daily Blarg »