For birthdays one through eight I do my best to make my kids super cool cakes. I’ve done everything from a gut-filled spider to a castle to a treat-filled train. I’ve even done Curious George, Winnie the Pooh and Blue from Blue’s Clues. For George’s recent birthday I pulled out all the stops for some seriously lifelike (who am I kidding?) shark cupcakes. I’m not sure what I’ll be doing for Livi’s birthday in August but it better be good! 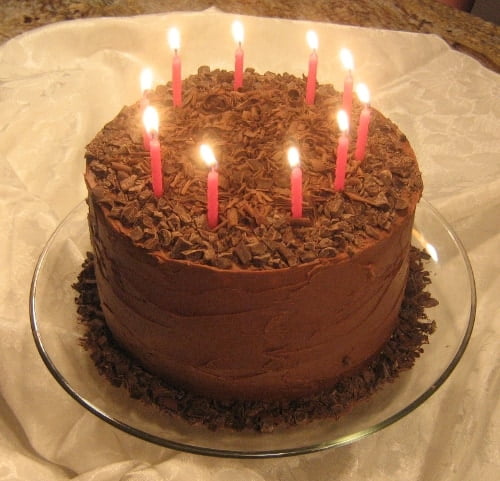 After the age of eight I scale back the cake making and simply make whatever flavor cake they choose. We’ve had Funfetti, spice, yellow and even Ferrero Rocher cupcakes. I was jonesing for some chocolate cake (my favorite) so Lauren immediately became my favorite child when she asked for chocolate cake with chocolate frosting for her recent birthday. Though I don’t do Guggenheim-worthy creations from the age of nine on up, I do try to do something a bit more special than boxed cake mix and canned frosting. Don’t get me wrong, 99% of the time that’s what I use, but a birthday gives me a really good reason to do the from-scratch thing.

I found Sandy’s Chocolate Cake on Allrecipes.com and knew THIS was the cake I had to make: three layers of chocolate cakeyness topped with highly rated (via the reviews) chocolate frosting. So I bought the ingredients, most of which I already had on hand, baked the cake, cooled it, frosted it and topped it. Before I go into the details, here are some helpful thoughts if you plan on making this cake:

…
And now for the recipe! 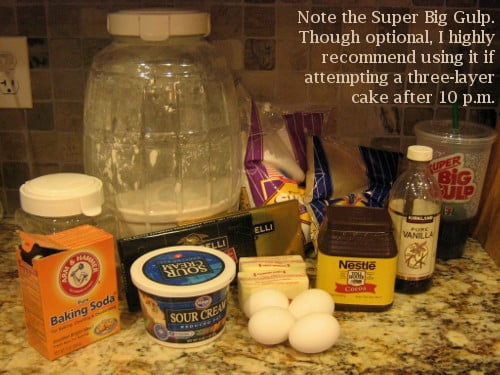 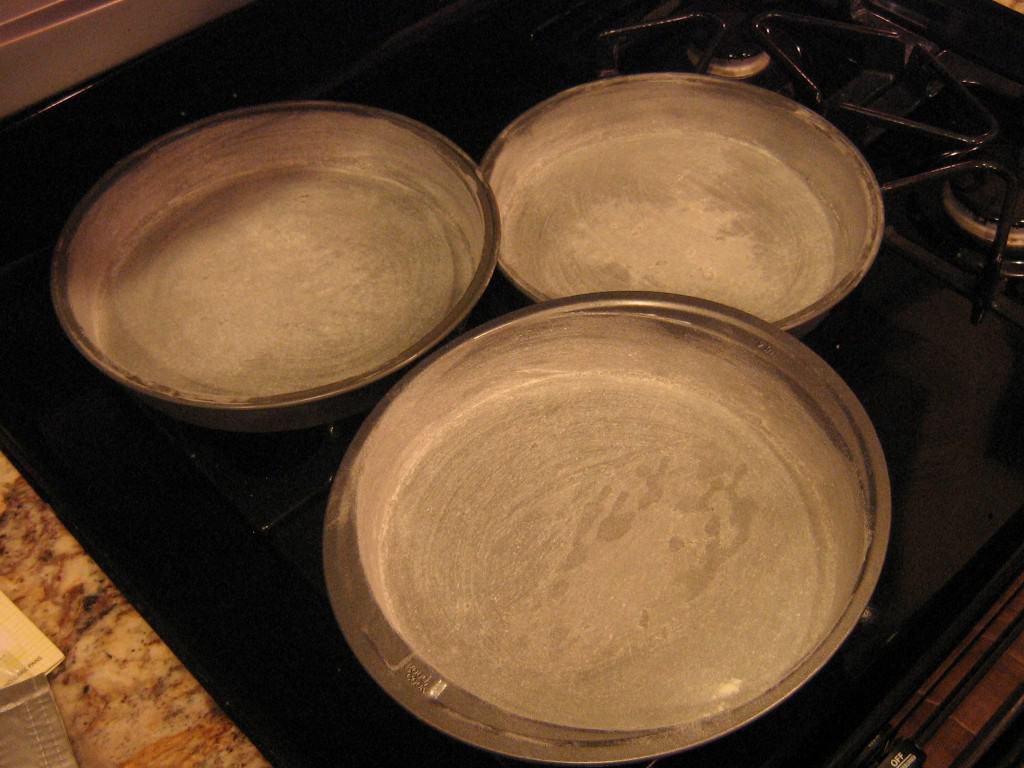 {I included this picture to show you my mad greasing and flouring skills.}

WARNING: DO NOT use THESE! 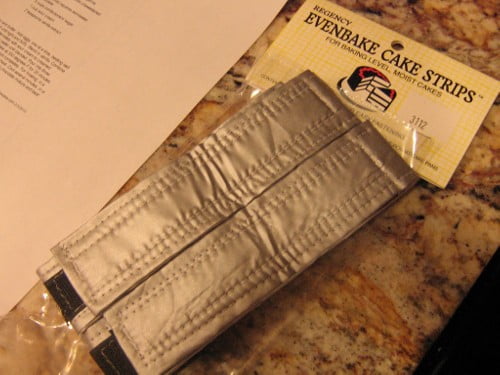 In a mixing bowl, cream brown sugar and butter. 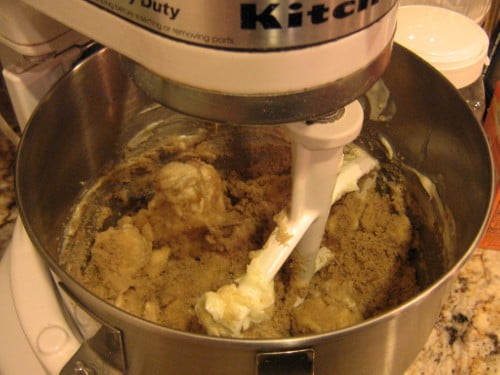 Add eggs, one at a time, beating well after each addition. Beat on high speed until light and fluffy. Blend in vanilla. 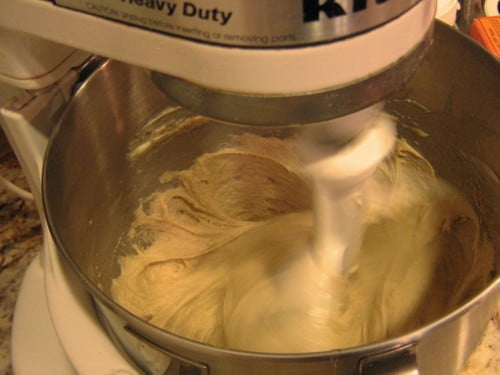 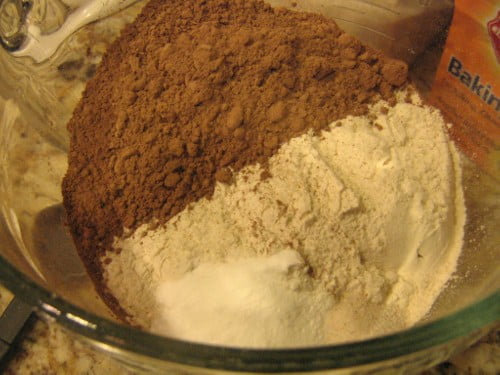 Add alternately with sour cream to creamed mixture. Mix on low just until combined. Stir in water until blended. 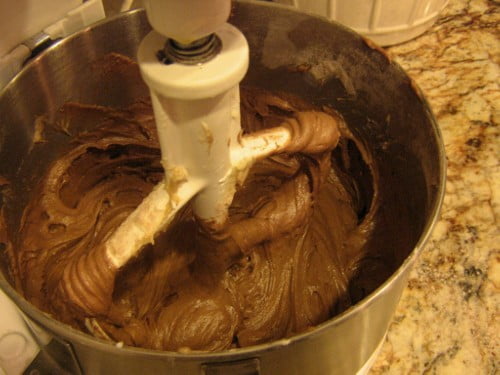 WARNING: Combine water by hand before turning on mixer to seal the deal, otherwise your Kitchen Aid will end up looking like this. 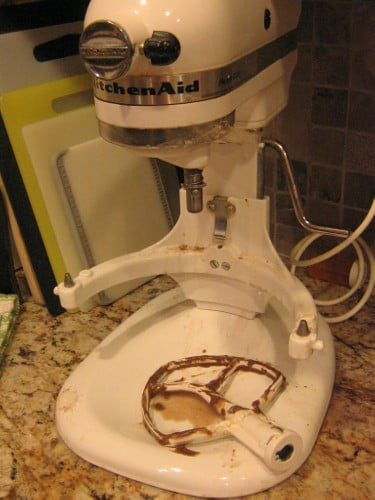 {Note: This picture doesn’t do the disaster justice. Liquid was everywhere!}

Pour into three greased and floured 9-in. round baking pans. If you have Evenbake Cake Strips on your pans, REMOVE THEM! Bake at 350 degrees F for 35 minutes. 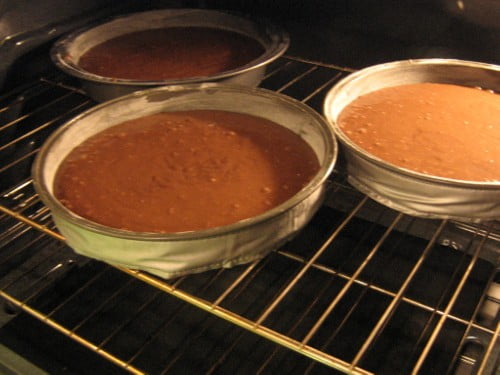 The pics I took while making the frosting didn’t turn out so well (lucky you!) but it’s fairly easy. For frosting, in a medium saucepan, melt butter and chocolate over low heat. Cool several minutes. In a mixing bowl, combine sugar, sour cream and vanilla. Add chocolate mixture and beat until smooth. Frost cooled cake. 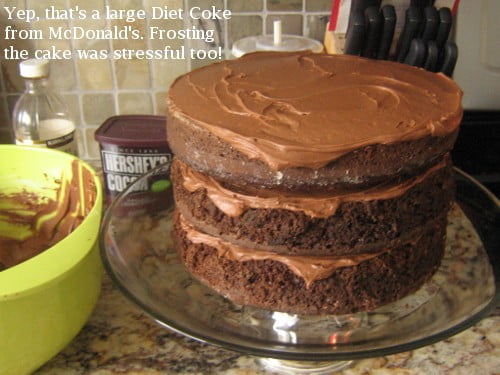 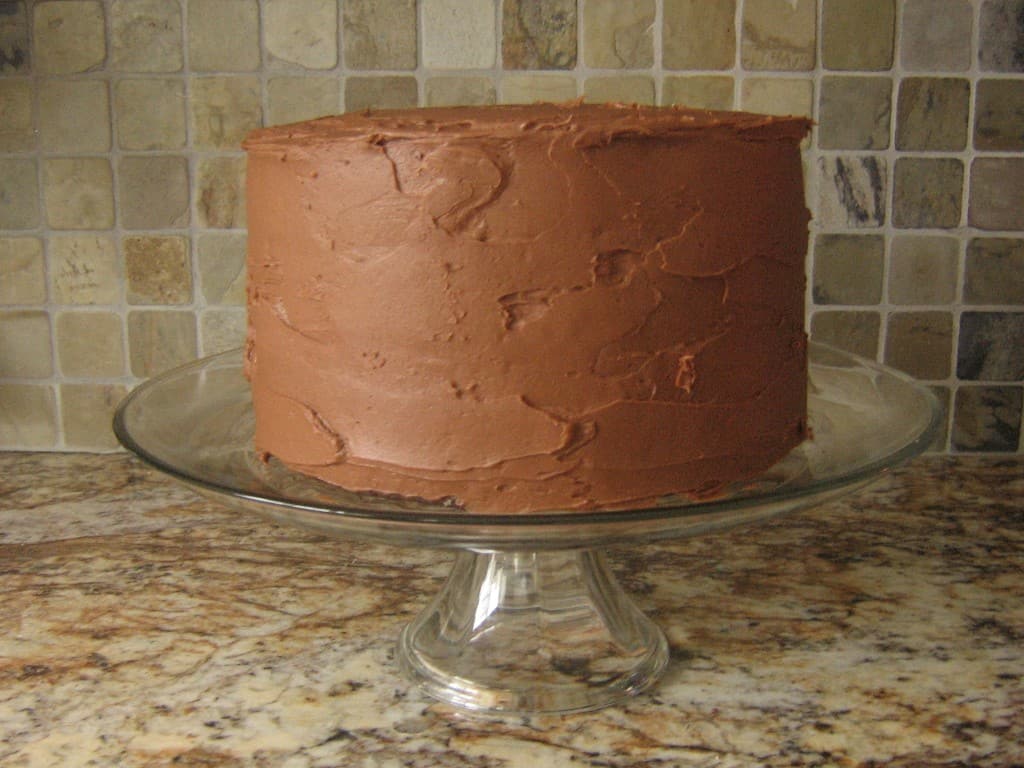 I think it was a hit! 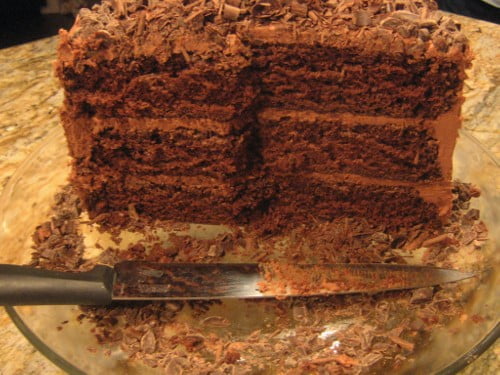 For making the chocolate curls I found a great little how-to on About.com here. I thought it would be fun to do our own how-to. Lauren was the videographer and George was, well, George. Enjoy!

Previous Post: « Chocolate-dipped delights even I can make
Next Post: Let SNL serenade you for Valentine’s Day »