(Our most recent guest Mad Libber was Kendra from My Insanity. You’ll love her “It’s Not You, It’s Me…” Mad Libs!)

Today’s “Should You Take Him Back?” post comes to us courtesy of Lara from Less Cake {more frosting} and is from the Test Your Relationship I.Q. Mad Libs

Hope you’re not tired of my Twitter-friend-turned-real-life-friend guests yet, because I have a few more coming!

I met Lara (@LaraEllieG), or rather saw Lara, at a brief pre-EVO lunch and couldn’t wait to meet her for reals. I knew I’d love her thanks to the super cute pixie-style hair she was sporting. (We modified short-hair girls need to stick together.) I didn’t get to chat with her too much except in passing, but after post-EVO Twitter convos, I knew we would be fast friends. We share a love of Neil Diamond AND Diet Coke. ‘Nough said. Lara shares her “not crafting” (i.e. hobbies and creative endeavors) on Less Cake {more frosting}. After the story you’ll find a few interesting facts about her and a shot of her uber sexy hair. Enjoy!

SHOULD YOU TAKE HIM BACK? 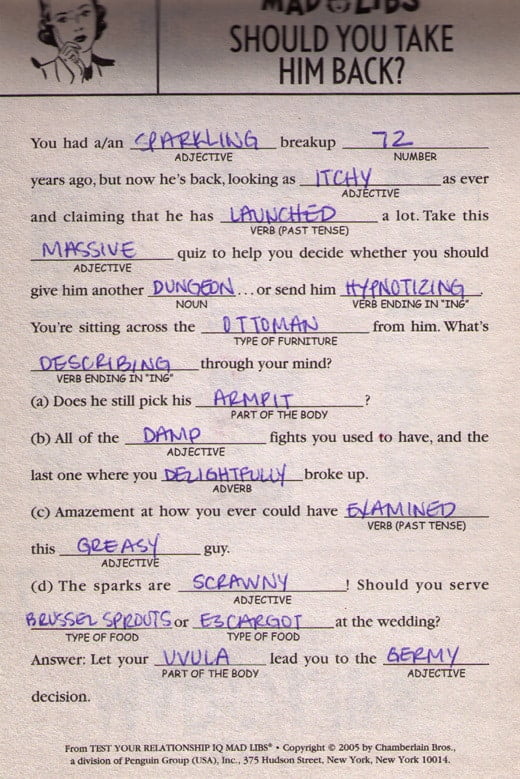 Yes, this really is Lara’s life… 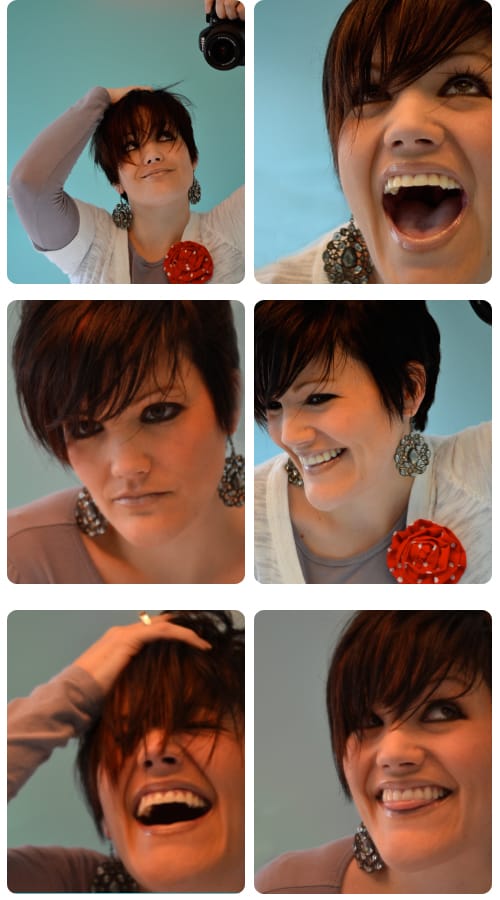 Name and/or nickname: My name is Lara. I started my blog under an alias, so a lot of people know me as Ellie G. I’d like to say it’s a long established nickname. But, in truth, it’s my lack of a nickname that started it. I’ve always wanted a nickname. My name is just too short. I think I tried to change my name to Tina once. And in High School I tried to make Daisy my nickname. I picked up Webster for a bit, because I use big words. But if George Costanza has taught us anything…it’s that you can’t force people to call you a specific nickname. (T-BONE!) **please disregard if you don’t get Seinfeld references. And, really, you should brush up. That show was F-U-N-N-Y!**

Where you grew up: I grew up in the ‘ol Valley of Cache in Northern Utah. I usually just say “Logan.” But it’s technically Providence. And the only reason to clarify that, is in case people assume that I went to Logan High School. Which I most certainly did NOT! (Go ‘Stangs!)

Favorite childhood game: Well, that’s a loaded question. Because truly, I excelled at games I made up. When I lost, I would make up obscure exceptions that made me the winner after all. We had a great game of “Police” where you had to ride your bike at the set speed, and try not to get tickets. Or “Universal Studios Tour” where we would tie our bikes together and I would lead the bike train through the neighborhood and describe the sights we were passing. Or “Zap,” a volleyball type game played with a foam block and a piece of yarn. I know. You want to play now….don’t you?

Super cool mom moment (i.e., one of those moments when you were the coolest mom ever): How long do we have? I AM a cool Mom. (I frequently pull out the Amy Pohler line from “Mean Girls”…”I’m not a regular mom, I’m a cool mom.”) But the one that made me feel the coolest was when I went to help in my son’s 2nd grade class and overheard one of the kids ask, “Who’s Mom is that pretty one?” And without even finding out who they were actually talking about, my son said, “She’s my Mom.” Awwww…

Totally uncool mom moment (if you’re willing to share): Well, I have a supply of Depends. That’s not cool. It’s even more un-cool that I’ve had to re-stock occasionally. (That’s not TMI people…that’s what childbirth will do to ‘ya. NOT. COOL.)

Your go-to “drug” of choice (e.g., Diet Coke, chocolate, Peeps, Venti anything from Starbucks): Diet Coke is my supermarket liquid drug of choice. I frequently OD on sugar drugs. But I change those up a lot. They are usually super soft Red Vines, Swedish Fish (with a bit of an aged crust…yum!), Butterfingers, anything gummy, seriously…this list could be huge. My actual drug of choice is probably Ambien. And MAN am I hysterical after I take it!

Your guilty indulgence (e.g., reality TV shows, pedis, chick lit): Well, I think I am a long lost Kardashian sister. So there’s that. I also indulge whole-heartedly in The Tar-jay. Oh, and don’t forget my occasional partaking of the Rap music. Yep. It’s a fact.

If you were stranded on a desert island, preferably in the Caribbean, which famous person would you want with you and why? Oh my. This could not be a harder question. I’m a celebrity stalker. If you had asked me this in the 90’s…I would have screamed “Joey Lawrence!!” And we would have been off to the island. WHOA! Now? Well…if I have to pro-create it would be Nick Lachey or Josh Duhamel. If it’s to laugh, it’d probably be Ellen Degeneres. If it’s to sing duets, it would be Lea Michele (from Glee). We would totally put on awesome concerts. But who would clap? Hmmmm…might have to re-think. Maybe I’ll just go with Neil Diamond. After all, I AM a Diamond Girl Forever. (And the shiny shirts might reflect the light and signal a rescue plane. See? Always thinkin’!)