The following is a guest post by my dear friend Molly. She is the genius behind this amazing diaper cake, and a brilliant way to coordinate outfits for family photos.
... 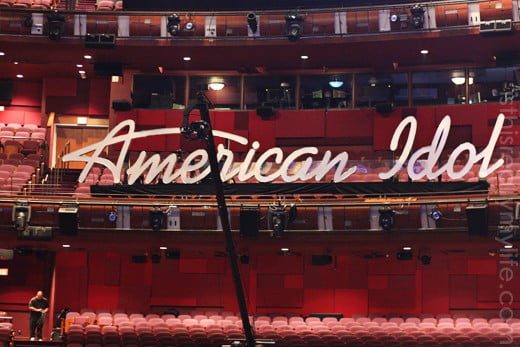 Inside the Dolby Theater during American Idol Hollywood Week

I am a long-time American Idol fan so when my good friend Emily got to visit Hollywood, I was equal parts happy for her and insanely jealous. As punishment for her good fortune, I've been inundating her with my Idol wisdom ever since. She insisted I write some of it down. I think she’s hoping it will be cathartic to vent what are obviously years of frustration culminating in my official break up with Idol at the end of last season. It had to happen. When I could watch a 2-hour episode in 30 minutes, mercifully fast forwarding through everything but Jimmy Iovine and the best singers, it was time.

But then came Harry. Harsh Harry, I love you. Idol, I forgive you and am giving you another chance. Still, I have to get some stuff off my chest before we move forward, and I have access to an IdolTweetheart now so pay attention!

There isn't one entertainment magazine, TV critic, Idol chat room, or random blogger who owns a television that hasn't told you exactly what went wrong with your little singing show. Don’t you spend like a gadzillion dollars on marketing research? I can only assume they've spent every penny building a giant force field to protect you from the common sense truth. This is why everyone has been cheating on you with that other show—you know, the one that’s been kicking your ass for going on six seasons now. This breakup is all your fault. You never listen.

Fortunately for you, by hiring Harry you immediately remedied many of your more glaring errors. How refreshing it was to tune in last week to likeable judges with real chemistry and something relevant to say. For the first time in years I was treated like an intelligent adult instead of a prepubescent teen, who frankly can’t even drive to the store to buy those Coke products you’re pushing. I too, don’t care about vocal gymnastics, don’t like people who “disrespect the process” and am hard to impress.

It's week two and already great strides have been made, but you, my Idol show, are still on probation with me. Here’s what you still need to do to stay on my good side.

I love a good back-story but come on! We got it the ninth time. His wife died, she was adopted, he lived in his car. Quit creating caricatures. You pride yourself on the fact that unlike The Voice, American Idol creates stars. Did Carrie Underwood come with a sob story? I don’t remember and I don’t care. Back-stories might get some votes but they don’t sell records. Create an Idol, not a pity party. Let it go.

Your comments will largely decide where the votes go. When it's a love fest for everyone, the wrong person goes home. Be critical. Be demanding. Mentor, teach, give specific instructions, influence the contestants' decisions and show us more of the process behind the scenes. The Voice has already proven impartial judges don’t necessarily equal a better show. Tell America whom to vote for and why. Have something intelligent to say because I am sick to death of “you made it your own.” Do not keep telling me 'this is a singing competition' because it's more than that. You are trying to create an 'Idol.' Try harder.

Just like the new tone of the show, I feel hopeful.

Don't forget to sign up for free is this REALLY my life? updates via RSS or email so you don't miss a single awesome post.
...