Try it. I dare you to keep a straight face.

Though these brownie bites won’t change the world, they may change how you eat brownies. For me they’re the perfect way to work in a bit of portion control with your desserts. (It works as long as I can stick to eating just one.) 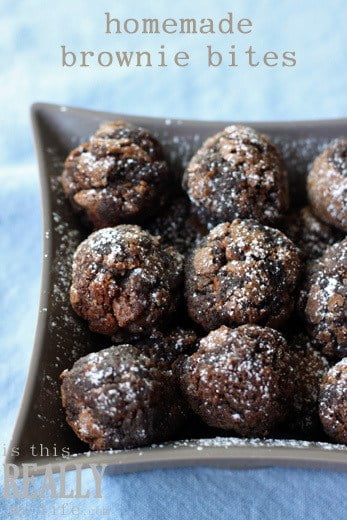 Lauren invented these homemade brownie balls—I mean, bites—when she baked a batch of brownies for me after I had surgery a couple weeks ago. Here’s the story behind the brownies in Lauren’s words (because it’s so much more fun that way):

Mama was just getting back from surgery and I wanted to make her a special treat. I was babysitting the neighbor’s granddaughter that day and so I kind of wanted to make it fun. I went downstairs and saw the family-size box of brownie mix. (I actually took out a ruler and measured the pan to make sure I had the right size.)

I followed all the directions and mixed all the ingredients together and cooked it for half time and turned it, then cooked it for half time because our oven cooks uneven. When they were done, I took them out, put in a toothpick and saw that it was clean. I let them cool for about 10 minutes, and when I tried to take them out, I realized I hadn’t sprayed the pan and I tried to cut them but they wouldn’t cut correctly.

I cooked them for 10 more minutes and after that I tried to cut them again and it didn’t work. So I tried to take out a brownie and it was practically just mush. It was cooked, but just mush. And so I was like, ‘Oh, I heard about cake bites!” and so I rolled them into balls and they were just good!

Lauren actually refrigerated the brownie bites; when I finally tasted them, they were perfectly chilled. Oh my gosh—they were delicious!

They were so good I made Lauren whip up another batch on Tuesday. This time she used a decadent peanut butter brownie mix and a 9×9-inch pan.

Those brownies were so yummy they disappeared in record time (in my belly of course).

The only adjustment I would make to her homemade brownie bites is to let the brownies cool and then cut them into equally sized squares (your choice on size) before rolling so each brownie bite is similar in size. Place them on a small platter, dust with powdered sugar and you’re good to go!

My daughter is a genius, what can I say?

She totally gets it from me.

…
P.S. Don’t forget to sign up for free is this REALLY my life? updates via RSS or email.
…