On Tuesday I posted a recipe for black and white cupcakes, which were part of the dessert buffet at my sister’s baby shower. Today I bring you the other batch of cupcakes I baked: funfetti cupcakes with my ever-favorite vanilla bean frosting. 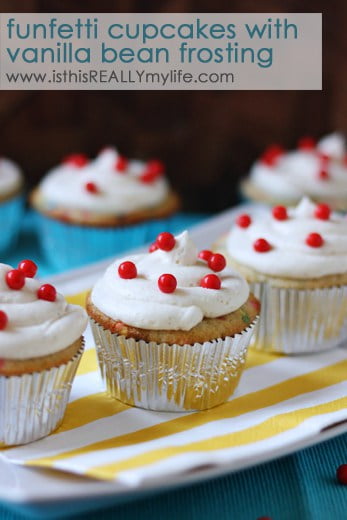 I have some leftover vanilla bean frosting in the fridge; perhaps it’s snack time.

My sister’s favorite cake of all time is funfetti, and though I’d baked a funfetti cake for a previous birthday, I had yet to make it in cupcake form. I tried out a new funfetti recipe, and after adding some extra flour to the mix to adjust for high altitude (i.e., my first batch of cupcakes had sunken centers), I found this recipe just as yummy though a lot lighter than the first one I tried.

If a less dense, lighter cake is your thing, then you’ll love these funfetti cupcakes. If you prefer a more dense batter, check out my recipe for homemade funfetti (confetti) cake.

Printable recipe for funfetti cupcakes with vanilla bean frosting below.
…