I make funeral potatoes maybe once a year and only when I know at least four other people are joining us for dinner. That way I don't eat my weight in potatoes, butter, cheese and cornflakes. 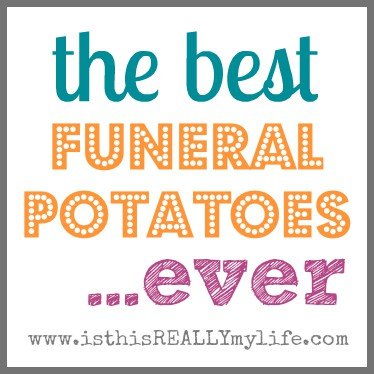 Because I don't make them for less than a party of 10, I'm not planning on whipping up a batch until Easter Sunday, which means I don't have a photo for you to pin drool over. I did find plenty of photos via Google images but I didn't have time to contact the photo's owner, ask for permission and explain I wanted to use the photo so I could post my recipe, not hers (even though I'd totally cite the source and everything). It sounded just a wee bit tacky.

Instead you get a photo-less super awesome image I created using PicMonkey.

Once in a while I even surprise myself.

This funeral potatoes recipe takes your standard recipe using frozen hash browns and kicks it up a notch by substituting Ore-Ida Potatoes O'Brien (the ones with peppers and onions) for some of the frozen hash browns. The O'Brien potatoes add just enough zing without being too peppery for the kids. I combine that with a bag of Ore-Ida Southern Style Hash Browns for a 9x13 pan of deliciousness!

And no, I am not being compensated by Ore-Ida. I really and truly prefer using their potatoes in this recipe.

These funeral potatoes are always a hit, which is why I sometimes make two pans—as long as at least 15 people will be in attendance.