I'ts National Pie Day ...hip,hip, hooray! (Like I need an excuse to bake Dutch apple pie. Or any pie for that matter.)

Let's face it. I don't need an excuse for baking—and eating—dessert.

I originally posted this recipe back in 2011 as "our favorite crunchy apple pie", but then I stumbled upon Mom's Dutch Apple Pie on Cafe Johnsonia and knew I had to incorporate her ingenious pie crust into my favorite Dutch apple pie recipe.

Mixing the crust in the pie plate? Done.

You can see step-by-step photos for this magical pie crust on Lindsay's site here. In the meantime, print out this recipe for Dutch apple pie and make it today. Don't forget to top it with a drizzle of caramel, chopped pecans and whip cream!

It IS National Pie Day after all. 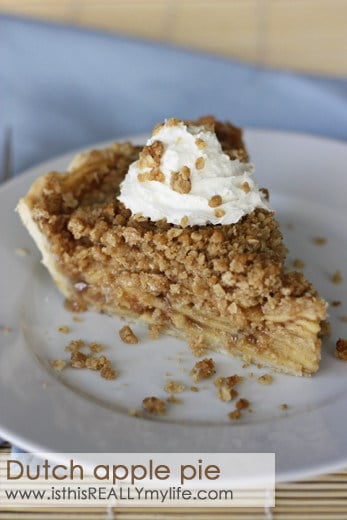 Printable recipe for Dutch apple pie below. And below that is a super cool announcement about a fabulous Pinterest contest—don't miss it!

NOTE: I baked the pie in a larger deep dish pie pan and used 1 ½ times the the pie crust recipe.