Yes, brinner (i.e., breakfast for dinner). Our family enjoys eating things like these delicious cinnamon waffles for dinner on a weekly basis. 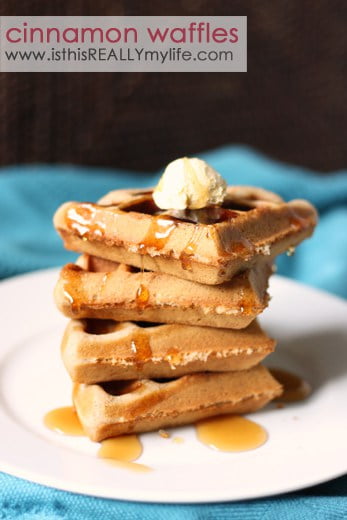 If you're new to ITRML, then you may not have heard about our family's themed dinners three days of the week. Tuesday is Taco Tuesday (Mexican-inspired dishes; Wednesday is Waffle Wednesday (breakfast-themed meals); and Thursday is Thursketti (Italian, baby). These themed dinners have greatly simplified meal planning.

In fact, it's all the meal planning I do these days. *sigh*

Last week we baked up a huge batch of these cinnamon waffles and everyone loved them. When I cooked the first set of waffles, I was a bit disappointed they weren't as crisp as our typical Belgian waffles. But I happily discovered they crisped up after sitting a minute or two. Yay for crisp edges!

Though you don't need much syrup with these babies (if any at all), I couldn't resist topping it with butter, syrup and powdered sugar. What can I say? I love sugar for breakfast as much as I love it for lunch, dinner and dessert.

Do you ever eat breakfast for dinner? If so, what's your favorite brinner meal?

Printable recipe for cinnamon waffles below.