Remember my post all about hosting a fab girls’ night in (aka kids’ night out)? I promised recipes for the goodies I had on hand from our November book club and I’m making good on that promise. Yes, it was November so you’d think soup would’ve been a more logical choice, but I really wanted to make fancy sandwiches, so I went for it even in 50-degree weather.

First up, the artichoke dip. 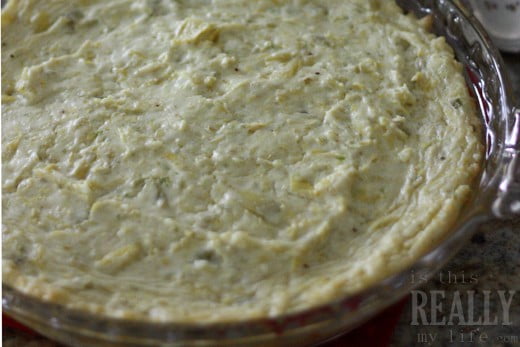 …
It’s actually the Pioneer Woman’s recipe and I love it! I tend to make it a bit on the spicy side, but you can add as little or as much heat as you’d like.

Preheat oven to 350 degrees. Add one can of the artichokes, cream cheese, mayonnaise and green onions to the bowl of a food processor. Add cayenne pepper to taste.

Pulse the mixture 6 or 7 times. Mix in the Parmesan and salt and pepper to taste and set aside. Roughly chop the artichokes from the remaining can until their bite size. Add the artichoke pieces to the dip and gently stir.

Pour the mixture into an oven-safe dish and bake for 15 to 20 minutes until heated through and bubbly. Serve with tortilla chips, baguette slices or crackers.

…
Next, the finger sandwiches…or tea sandwiches if you’re fancy like that. 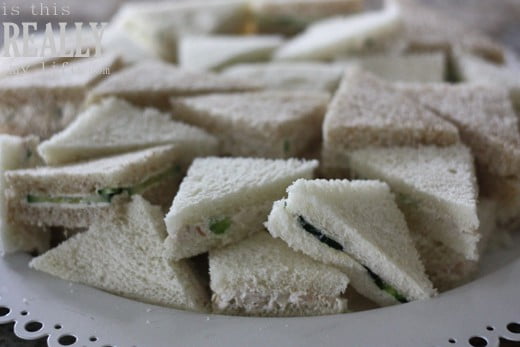 …
I served two kinds of sandwiches: chicken salad and cucumber. The chicken salad was from the deli counter at Smith’s. While I prefer Costco’s chicken salad, I never go to Costco for just one item. Somehow I end up with $300 worth of groceries in my cart.

For the cucumber sandwiches, I combined one package of reduced-fat cream cheese and one package dry Italian dressing mix. I let that come to room temperature to make it easier to spread. I put a light layer of the cream cheese mix on both sides of the bread and a single layer of thinly sliced cucumbers in between.

And of course, don’t forget to cut off the crusts. We grownups don’t get crust-free sandwiches very often and it feels so good to indulge. 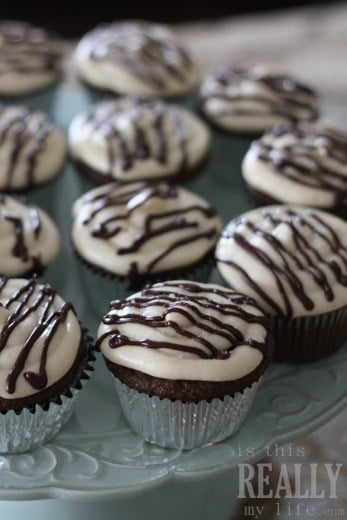 …
Recipe for chocolate pumpkin cupcakes with salted caramel frosting below. (Recipe for the optional chocolate glaze follows the printable recipe.)

Print
Prep time
1 hour
Cook time
20 mins
Total time
1 hour 20 mins
Another take on a pumpkin cupcake with salted caramel frosting. This one is for those who love a bit of chocolaty goodness in their pumpkin cupcake!
Author: Emily Hill ~ isthisREALLYmylife.com
Recipe type: Dessert
Serves: 24
Ingredients
Cupcake
Frosting
Chocolate glaze
Instructions
Cupcakes
Frosting
Chocolate glaze
2.1.7
…
Note: I also use this glaze on my Better Than Pretty Much Everything Chocolate Cake.
…
Previous Post: « Girls’ night in (aka kids’ night out)
Next Post: “The Second Coming” »