Disclosure: American Idol Productions treated me to Hollywood Week by providing travel, accommodations and tickets, however, all thoughts, opinions, and incredulity at being chosen are 100 percent honest and all mine.

Actually, I don’t know why I’m at American Idol during Hollywood Week, but here’s the story as I wrote it earlier today…

I am writing this blog post as I sit on a Delta flight destined for Los Angeles, California. 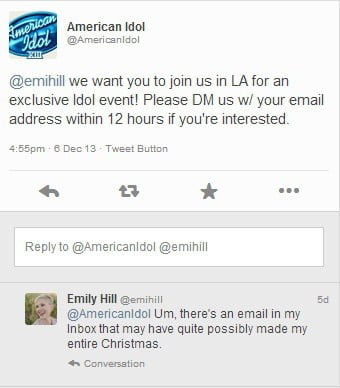 I may have taken a double (and triple) take when I saw that come across my feed. Perhaps they thought I lived in the L.A. area and were extending an invitation to come by for some large open house PR gig. But I thought, what the heck? American Idol just tweeted me. I might as well see what’s up. So I sent them the requested DM letting them know I lived in Utah but was game for just about anything (except driving to L.A. during the holidays).

Then I waited. And waited. I may have checked my email more frequently than usual, which is pretty sad since I check it far too often as is. And then XX hours later, I received an email from Ryan Secrest. Okay, it probably wasn’t really from Ryan Secrest but hey, it was official. And it was an invitation to join American Idol for Hollywood Week December 17th and 18th.

Nathan was in the office with me when I received the email and heard me say something to the effect of, “Um…umm…ummmmm…I have to read you something.” I read the email out loud and then promptly read it again. And then I checked the calendar. How could it be those were two of the least busy days of the holiday season? This was meant to be. Or maybe they had tweeted the wrong Emily Hill. Either way, they got me.

I later found out I would miss George’s 2nd grade Christmas program and Lauren’s holiday orchestra concert in which she had a solo, so yeah, I suck.

Nathan, who is supportive but probably wishes his wife wouldn’t get called away during one of the busiest times of the year, told me to go for it. To be honest, it may have gone more like this:

What can I say? I’m fiercely independent.

Within a day or so, a handful of us found each other thanks to Elizabeth doing some Twitter research and discovering who else had been sent the mysterious tweets. We quickly connected on Twitter and then on Facebook. We were all floored to have been chosen for this adventure, and for the life of us we couldn’t figure out what algorithm American Idol had used to find us.

You have me, an American Idol fan but not an American Idol die-hard fan. I only watch a handful of reality TV shows and rarely if ever blog about Hollywood or entertainment or music. And then you have the rest of the women in the group (yes, we’re all women) who include a college freshman, (young) grandmother (she’s the self-professed den mother of the group), a couple PR/marketing gals, a couple social media gals, a DJ, and a blogger or two. We all have very different social media footprints, backgrounds, families, ages, interests yet we were all selected by American Idol for this adventure. And none of us knew each other before we connected this week. Go figure.

Whatever American Idol has in mind, I am excited, elated, grateful, nervous to be a part of it. I’m not sure what I will be able to share of this journey but I will share what I can.

I can tell you this: you would be amazed at the pairs of shoes I managed to fit in my carry-on bag. I swear it’s half shoes and the other half makeup and jeans. Hopefully I threw in a few tops or I could be wearing the same denim shirt for two days.

I mean, what the crap do you wear to Hollywood Week where you’ll see behind the scenes of American Idol and possible meet the new judges Harry Connick Jr., Jennifer Lopez and Keith Urban?

Before I wrap things up, I must give a shout-out to my hair stylist Elise from Steur & Friends who fit me in early Saturday morning so I could at least have rock star hair and to Megan who came over late Sunday evening to approve my outfit choices. Who knew you could wear black shoes and a brown belt?

I’ll be sharing what I can via Instagram barring any crazy NDAs.

By the way, I may have packed my Harry Connick Jr. “When My Heart Finds Christmas” CD just in case I can snag an autograph. I’m hoping someone has a spare Sharpie.