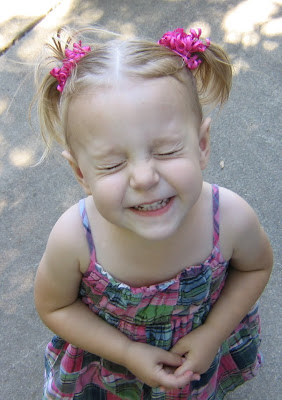 And by “very blue” I mean her color, not her state of mental well-being. While in California it was Livi’s 2nd birthday so we celebrated with a barbecue (Dad, those burgers and dogs totally rocked!) and a Blue’s Clue’s cake. Livi is way into Blue’s Clues right now, which seems pretty typical for her age. I think all my kids have gone through a BC stage!

I love making theme cakes for my kids—at least until they turn 8 and then it’s just their favorite type of cake, theme not included. I’ve done everything from a princess castle to a multi-car train to a spider complete with ooey, gooey guts. Sometimes they are works of art, other times they’re just work; either way they always taste good!

Had I been better prepared and taken more time and energy to plan, Livi’s BC cake would’ve turned out a bit differently. Perhaps the cake itself would’ve been shaped like Blue or we’d have accompanying paw print cupcakes, but with the flu making its way through just about everyone and her being my fourth child (I admit it…after four children their birthdays have gotten progressively lamer) I was happy working with what was at hand. It may not look like the Blue we all know and love, but at least it was blue. The true test came when Livi saw her cake and said, “Ah, Boo!” That’s all I could’ve asked for!

So here’s how I made Livi’s Blue’s Clue’s cake. We’re big chocolate fans so we went with a more non-traditional fully chocolate cake. Feel free to try it for yourself, though I’d go with white frosting so you can tint it a better “Blue.” You can also Google “Blue’s Clues birthday cake” and you’ll find lots of other great options. Have fun!

1 chocolate fudge cake mix baked in a 9×13″ pan
1 can fudge frosting (we’re all about the chocolate in our family)
1 tube blue decorator frosting
1 small container blue sprinkles
1 T or so pink sprinkles
2 chocolate chips
Blue’s Clue’s pattern from this website (I used the small 8.5×11″ version)

1. Cut out the Blue’s Clues pattern and tape the ear pieces together. Lightly place on top of the cake and use a toothpick to lightly trace around the pattern.

2. Use the chocolate frosting to frost around Blue’s silhouette. I used a large toothpick to fill in the skinny areas between Blue’s ears and head and around the outside of the ears. 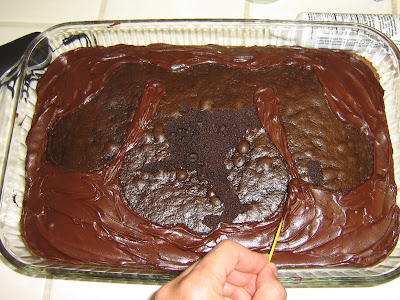 3. Cut out the spots, eyes, nose and tongue from the pattern and place in the correct areas on Blue’s face, then use the blue decorator frosting and a star tip to frost around the cutouts. I used another toothpick to make it look more like real puppy fur, though I guess in hindsight Blue really isn’t that furry. 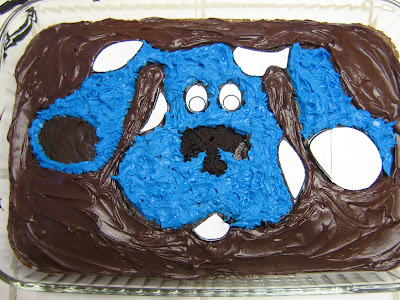 4. Remove the cutouts except for the eyes and frost in those areas with chocolate frosting (it helps to use a toothpick here too). Why not use the blue frosting? Two reasons: one, I had about run out and two, we really like chocolate. 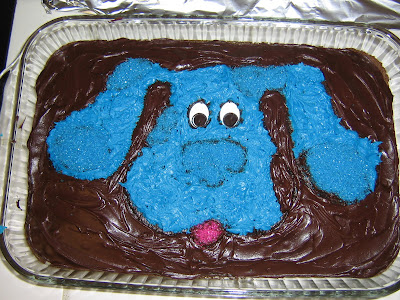 5. For the spots and nose use the blue sprinkles and for the tongue use the pink. I know, you could’ve figured that out yourself but hey, these are “directions.” I dumped a small pile of sprinkles in the center of each spot and then used a toothpick to spread them so they fully covered the chocolate frosting. I did leave a little trim of chocolate around the nose to help it stand out.

6. Take each chocolate chip and place a little frosting on the bottom. Stick those puppies (how appropriate is that?) on top of the cutouts and voilà! You’re done! Just remember to remove those cutouts before eating. Of course kids have been known to eat paper and survived so no worries if they get devoured before you can remove them. 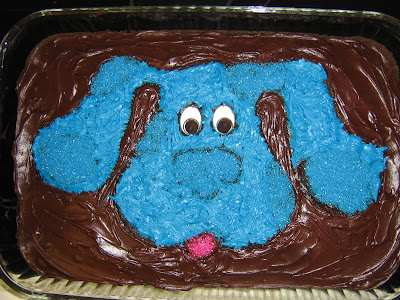 You can seem the resemblance, right? RIGHT?!?! –Emily